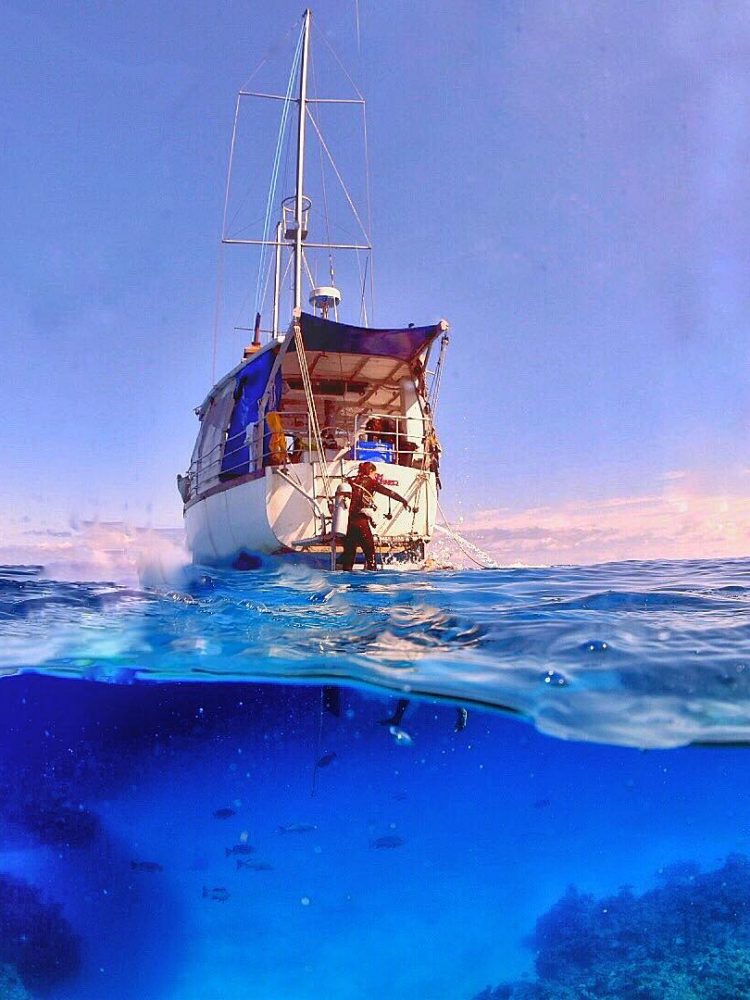 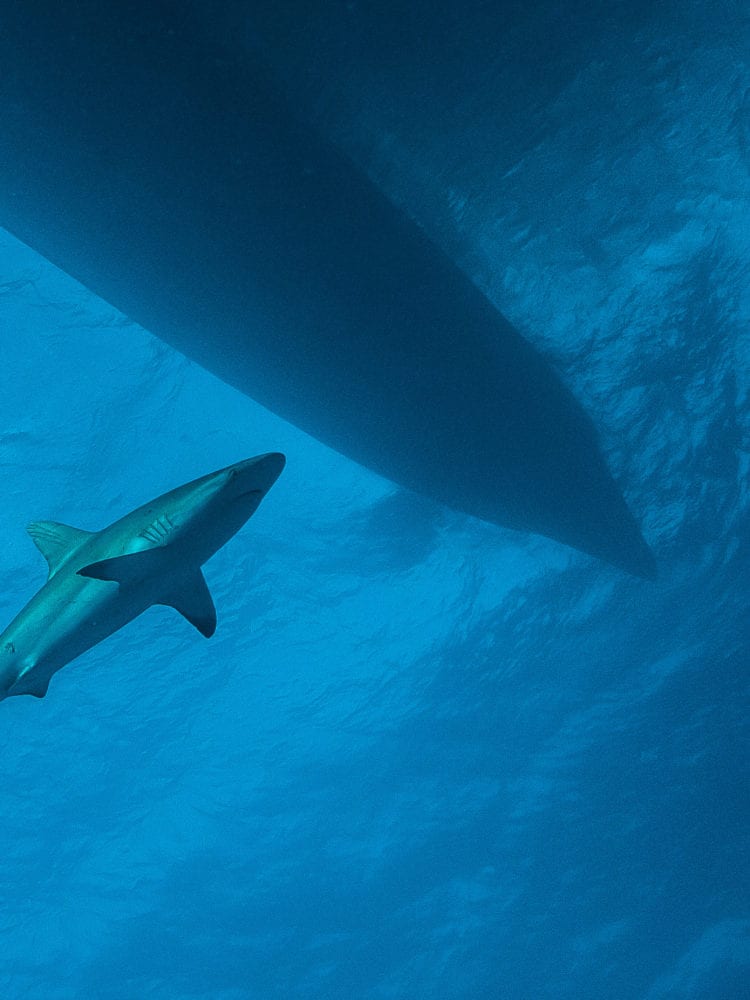 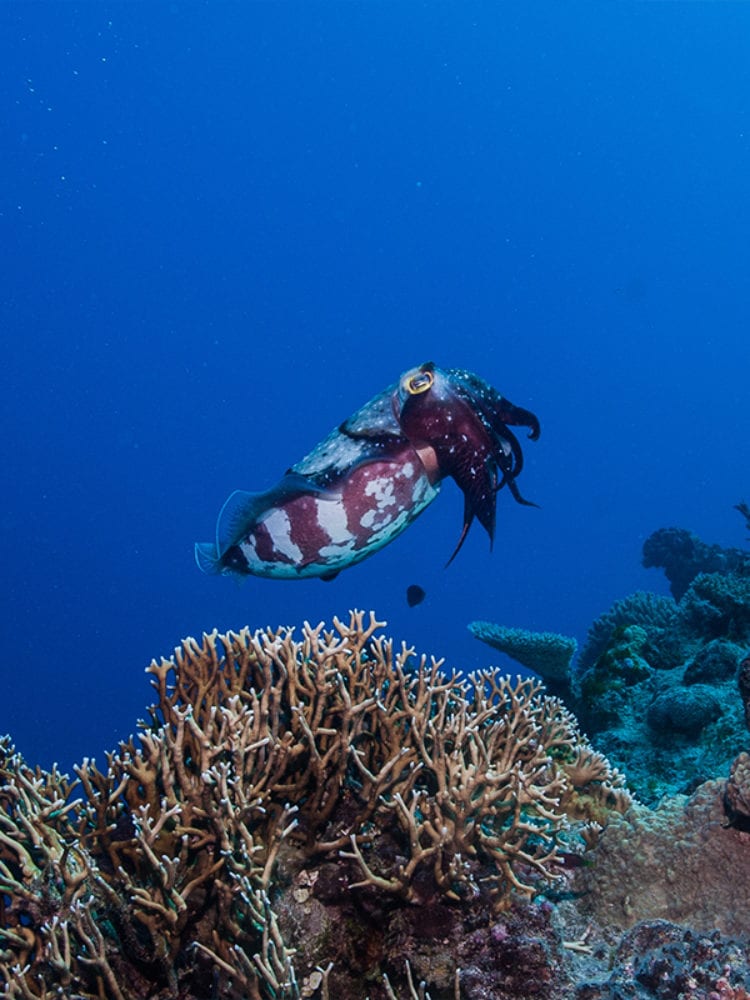 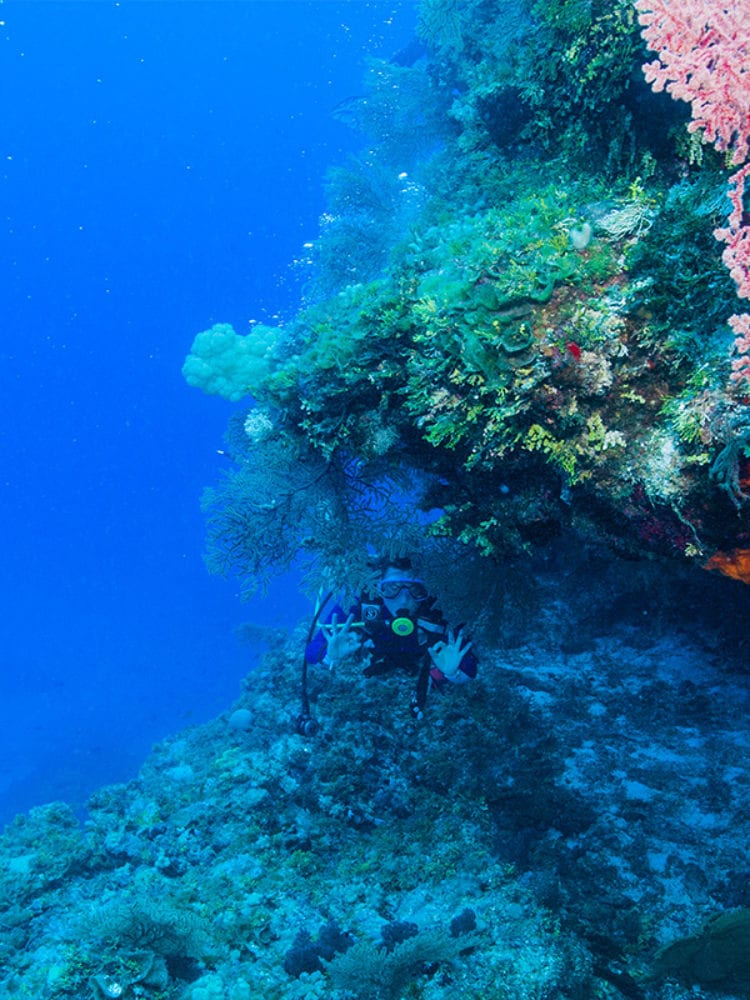 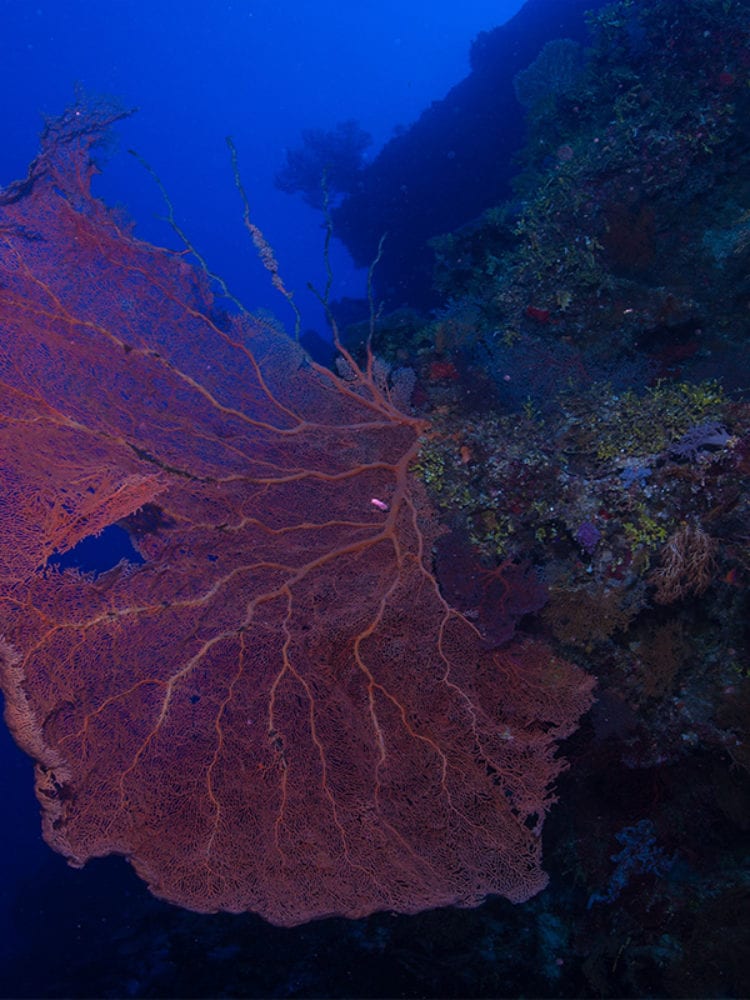 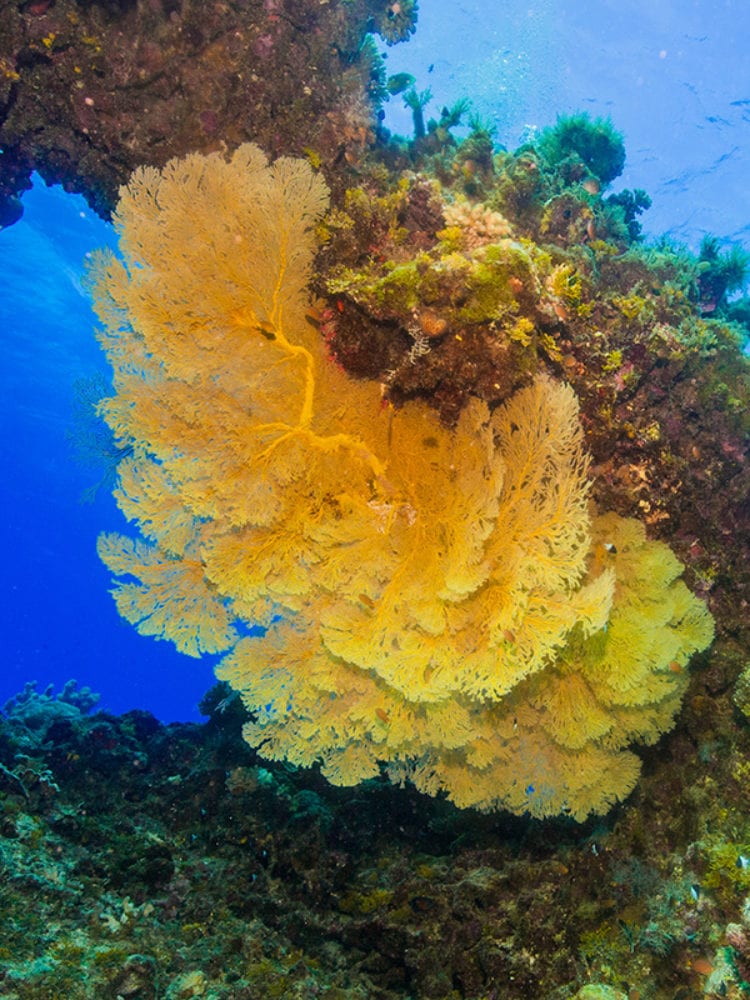 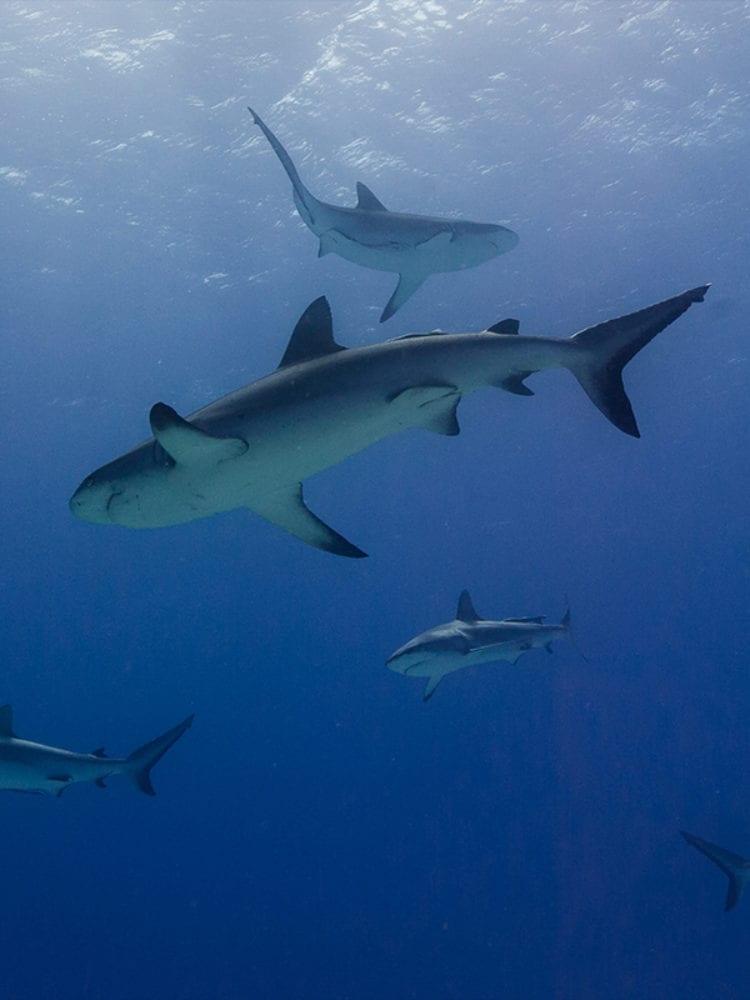 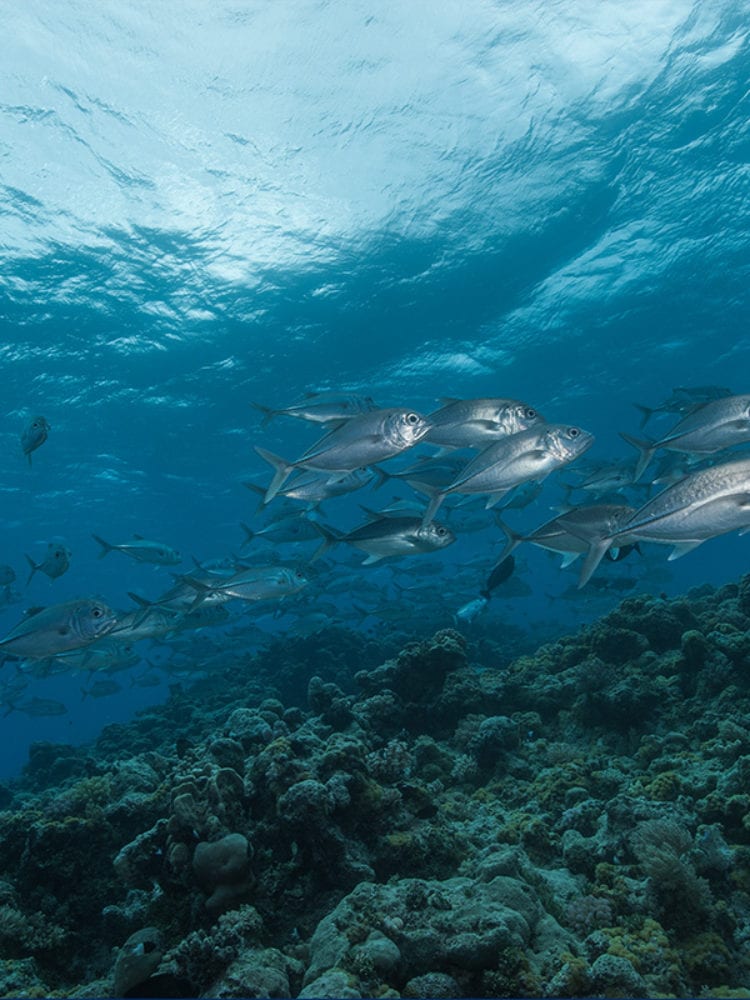 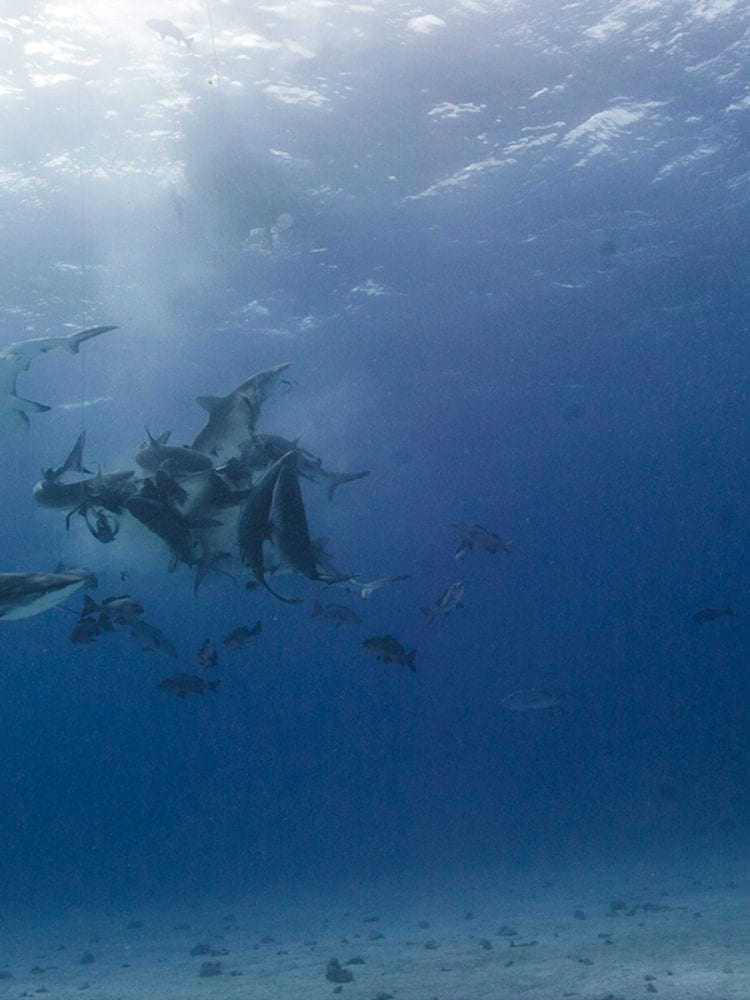 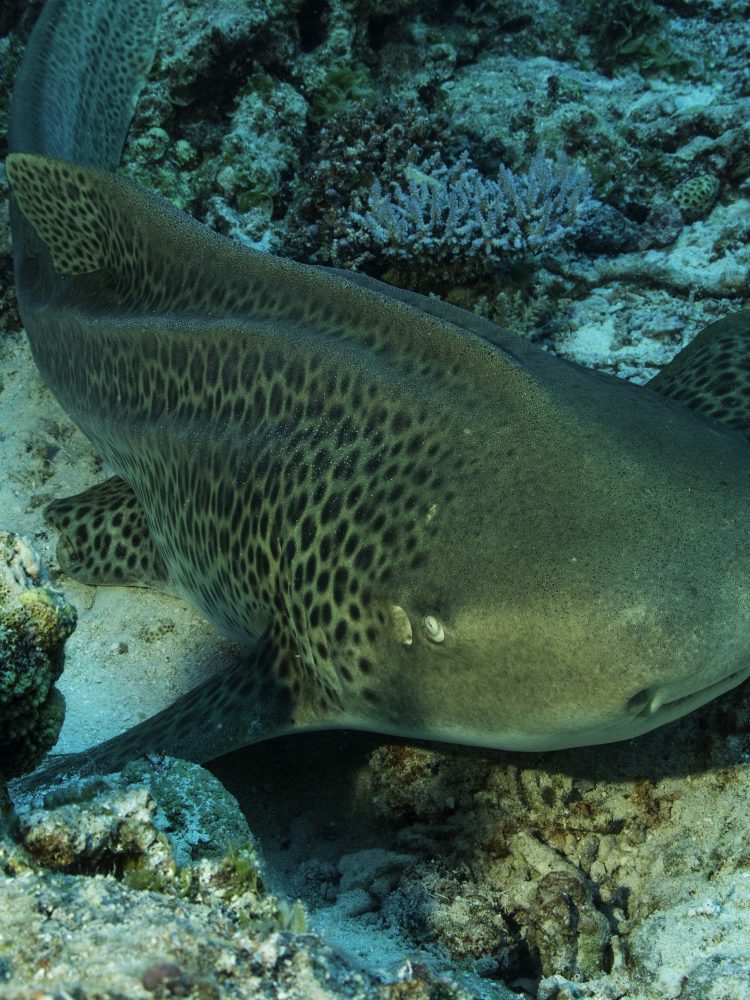 Join S.V Rum Runner, a 66 foot Mono Hull Sailboat onboard this adventurous  4 Day / 3 Night Diving trip to the amazing Holmes Reef in the Coral Sea.  With 9-10 dives possible at Holmes Reef which includes 1 night dive and a shark feed dive,  plus 1 sunrise dive back on the journey home to Cairns on the fabulous Great Barrier Reef on Monday morning.

Overall, Rum Runner is a comfortable and solid sailboat, well suited for adventurous divers with only single share beds. It’s all about the diving with no other liveaboard trip visiting this section of the Coral Sea.   There are USB and 240V AC outlets for charging cameras, and Hot water in both separate Male and Female Toilet – Shower cubicles.

Day 1: Cairns to Holmes Reef. Passengers meet at the company office (Rum Runner – Marlin Marina, E finger) by 4:00pm for an approximate 5:00pm departure. Passengers are briefed as to the itinerary and safety aspects of the trip and boat, and the dive equipment is organized, making it ready for your morning arrival at Holmes Reef. Dinner is served as you sail through Great Barrier Reef and watch the sun setting over the mountains behind Cairns. Guests can relax, have a few social drinks and get to know each other as the boat makes an overnight passage to the Coral Sea. Passengers are welcome to join in, grab a line and hoist a sail alongside the crew. In calm clear weather, the stars over the Coral Sea are an awesome sight.

Day 2: 4 or 5 dives ( i.e. number of dives are dependent upon our arrival time to Holmes Reef). While arriving to Holmes Reef a tropical breakfast is served, then the Dive Instructor will brief everyone on general dive safety and details of the first dive site. Diving will be tailored to suit individual experience levels. If anyone is a bit rusty one of the crew will accompany him or her on their first dive if they wish, guided dives can be arranged if required. It is time for some of the best diving in the world; Sites include Amazing, Nonki, Turtles Graveyard; from shallow coral gardens, isolated pinnacles to caverns, caves and spectacular walls, capped off with a fantastic night dive. Evenings are a relaxed affair, with just a chat and a few drinks on deck while at anchor in the calm water of the company’s protected night moorings.

Day 3: 4 dives, including shark feed dive. An invigorating deep dive at our secret Twins; before a hearty breakfast sees the start to a day of diving & exploring. Today’s diving includes swim-throughs, caverns and diving the fabulous Abyss, a sheer wall dropping 1000 meters and teeming with life; An ideal adventure for the Advanced diver but still safe and easy for the novice diver. A relaxing lunch break and then off to Predator’s Playground, another highlight of the trip.  Dive the Amazing Caves before the shark feed; Last Dive:experience the thrill of seeing sharks feeding at Predator’s Playground, the shark feed is conducted in a very controlled and safe manner and is in only 9 meters of water.

Now before departing the Coral Sea for an overnight sail to the Great Barrier Reef, finish the day with the a few drinks and dinner going over the photos and videos with your fellow divers.

Day 4: Return to Cairns. As you sail back into the Barrier Reef you can get up early at 5.30am and watch the sunrise (the early sun on the mountains is gorgeous) and get ready for our last dive ….. your bucket list dive on the famous GBR;  or you can just sleep in, until you feel like getting up, having breakfast and laying around while the boat sails back into Cairns. Arrive at Cairns at 11.00 am. Later in the evening meet with your new friends, the crew and fellow divers for a night out in Cairns.

Coral Sea and Holmes Reef FAQ's
Holmes Reef is a remote spot in the Coral Sea west of Cairns. It is much further from shore than the Great Barrier Reef and is, along with Osprey Reef and Bougainville, among the Great Barrier Reef’s most world-class dive sites. It can only be visited by Australian liveaboards that venture to the Coral Sea, and only when weather conditions permit. Holmes Reef is named after the young Captain Henry Holmes whose ship, the Thomasine, sank here en route to Hong Kong at a time when the reef was uncharted. Happily Holmes and most of his crew survived. They would certainly not have appreciated the splendour of the undersea world on these reefs, which would come to immortalise their struggle. The diving in this, one of Australia's remotest reefs, is highly rated with excellent visibility and a wide range of topography. You can expect shallow reefs with silvertip sharks and grey reef sharks, wall dives, caves, and some of the best night dives the barrier reef has to offer. Caverns are covered in bright and colourful soft corals, tall bommies are patrolled by an impressive array of sharks, and there are large archway swim throughs.
Reef Summary
Depth: 5 - >100m Visibility: 30 - 50m (Rum Runner has had 100m during the cooler months of July/August) Currents: Normally gentle, can be strong Surface conditions: Can be choppy, but good shelterage. Water temperature: 23 - 30°C Experience level: Beginner - advanced Number of dive sites: 10+ Distance: ~120 Nm east of Cairns
Dive Site Descriptions
Amazing - This site has a difficult name to live up to, but as a shallow wall teeming with sharks, soft corals and swim-throughs, it somehow manages it! You can expect to see grey reef sharks, silvertips and white tips numbering in the dozens. The wall itself is home to a number of large cavernous archways and swim-throughs between around 10 and 20m depth. Many are easily penetrated despite the thick bushy covering of soft corals. Within the caves and caverns look out for lots of lobsters and other crustaceans in the nooks and crannies, where a keen eye might also spot a stubbytail eel. Meanwhile, as you are poking around in the recesses, turtles and potato cod are always likely to put in an appearance, cruising by, casting a curious glance or two in your direction. Where the wall gives way to the sea floor the white sands slope away to a flat bottom where innumerable garden eels crane their bodies vertically in the quest for a passing snack.
Nonki Bommie
This is a big bommie, or pinnacle, that rises from 35 m depth to 4m from the surface and has split in 2, creating a canyon between the 2 fingers. The crack is full of vibrant and huge orange and yellow sea fans and all sort of soft corals. With your boat moored to the top of the bommie you will start this dive by sinking down to near the base and working your way back up. You can encounter big-eye trevally at both the tip and base of the bommie. Conditions are usually calm, making this one of the easier dives at Holmes Reef. Look out for larger creatures like dogtooth tuna, turtles, grey reef sharks, silvertips and occasionally even hammerheads. Smaller delights include clownfish, nudibranchs, long-nose hawkfish, pyramid butterflyfish, blackspot angelfish and fairy basslets and damselfish particularly near the tip.
The Abyss
Unsurprisingly this Australia dive site features a deep drop-off. This steep wall plummets to mysterious dark depths of over 1km! Sticking to the sun-drenched shallows you can enjoy the myriad reef life on a very pleasant drift dive. The Abyss is among the most popular dive sites of Holmes Reef although it can only be dived in relatively calm weather. Provided the conditions permit, you will be in for a treat, drifting along past a rich wall with hard and soft corals galore as well as giant clams in rude health. Larger species enjoying the current and the nutrient-rich water are grey reef sharks (or grey whalers as they are often called by Aussies), white tip reef sharks, mackerel and sweetlips. There are also plenty of small things to catch your eye while drifting past, including a range of nudibranchs, seemingly oblivious to the passing current.
Cathedral
Another Holmes Reef dive site with a rather dramatic name is the impressive Cathedral. Similar in profile to The Abyss, the wall here sinks down several hundred metres to the sea floor. Impressive hard and soft corals are matched by the meaty pelagic encounters likely here. You can expect the usual Holmes reef encounters with grey reef sharks, white tip reef sharks, and turtles as well as dog tooth tuna and potato cod. Also likely here are Napoleon wrasses, known in this part of the world as Maori wrasses. Golden anthias feature at the top of the wall, which is remarkable considering Holmes reef was the first place in Australia this species was sighted. Normally they are found in the central Pacific south of Hawaii.
Turtles Graveyard
No prizes for guessing the creature that this site promises more than any other Holmes reef dive site. Different in profile to some of the other sites here, Turtles is a series of shallow bommies on the edge of a reef. The sandy floor from which the bommies rise, is home to garden eels and resting white tip reef sharks. Potato cod and turtles are on the menu especially in the shallower sections. There is also plenty to see in terms of macro life and around the reef. Crustaceans abound in this site which is 1 of several here that make great night dives (illuminated by flashlight fish). Cleaner shrimp, Saron shrimp and Bumble Bee squat lobsters are among the more interesting residents. Excellent visibility is common here making Turtle a favourite site for underwater photographers.
Make enquiry

Let us help you

A comprehensive one-stop website when it comes to Australia’s ‘Must Do’ Dive Sites.

Dive in Australia are not affiliated with any of the dive operators or boats. We are an online Travel Agency specialising in Scuba Diving holidays in Australia. Our commitment is providing you unbiased advice, sharing our personal diving experiences, tour reviews and working with you to plan and book your diving holiday. Diving is our passion and we consider it a privilege to share our knowledge and experiences with you.

Enter your details below