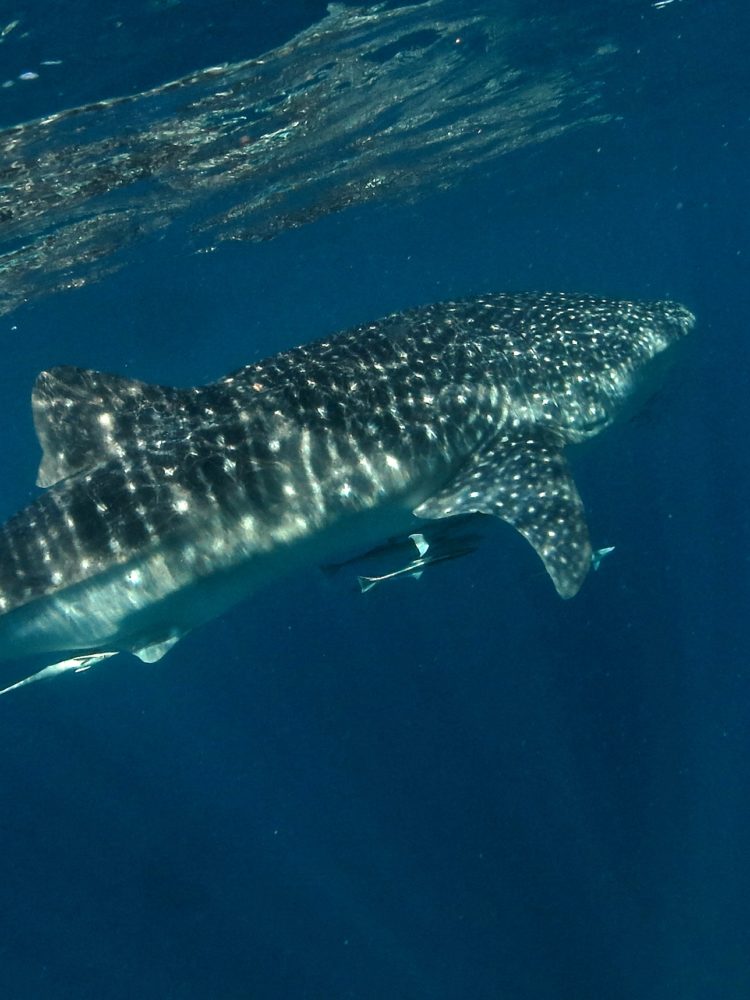 WHALE SHARKS (LATE MARCH – SEPTEMBER)
Swimming with whale sharks is one of the most amazing marine experiences you can hope to enjoy…
As the largest fish in the sea, a whale shark will dwarf you in the water, humbling you with both its size and serenity. While it’s called a ‘whale’ shark, it is in fact a shark. The ‘whale’ part of its name is a nod to its size and how it feeds.

Whale sharks were first ‘discovered’ by science in 1828, cruising the waters off the South African coast. It’s a relatively rare species. Although there are population pockets around the world, the most reliable place to go swimming with whale sharks is on Ningaloo Reef, in Western Australia. Here there is an annual migration of whale sharks, which coincides with a mass coral spawning event, which occurs around March / April of each year.

The annual whale shark appearance at Ningaloo has proved so reliable, that a lucrative ecotourism industry has developed, providing visitors from around the world with the opportunity to go swimming with whale sharks.

The best time to see whale sharks at Ningaloo is between late March and late July. At this time of year the tourism operators have recorded a 95% success rate, of finding and swimming with whale sharks. To be more precise, March and April are hotter and is when the coral spawning happens, so this is the start of the season and a time of strong whale shark sightings and encounters.

May is a quiet time for tourism and still a good month to see and swim with whale sharks. May and June sees the arrival of migrating humpback whales and manta rays; lots of whale sharks still to be found in the region. April and July are busy (school holidays); any time after late July, the numbers of whale sharks in the area starts to diminish, but the humpback whales are there. The actual swimming with whale sharks season runs until mid-September, with operators making assessments during each year pending their numbers and movements.

The Best Places to Swim with Whale Sharks

The best places to swim with whale sharks is definitely on Ningaloo Reef, with operators based in Exmouth and Coral Bay in Western Australia. Day trips have regular scheduled departures from both places and you can sometimes combine whale shark swimming with humpback whales and manta rays.

Obviously, whale sharks are wild creatures. Operators cannot guarantee you will see them on every trip. That being said, if you visit between late March and July, you have a 95% chance of swimming with whale sharks.

Whale sharks are the biggest fish in the sea. The largest recorded whale shark measured a massive 12.2m long, however, there are anecdotal reports of this gentle giant growing much larger than that. Their closest relatives are the bottom-dwelling sharks, including wobbegongs.

They are one of only three filter feeding sharks in the world. What does that mean? It means they eat in a way which is not too dissimilar to whales. Able to open their mouths very wide (larger than 1m) they ‘filter’ the water and food through a fine mesh of gill rakers. Their preferred diet is plankton but they also eat krill, jellyfish and crab larvae.

Do they have teeth and are they dangerous to people? Yes and no. They have about 3,000 tiny teeth (!) but we’re not talking ‘Jaws’. Whale shark teeth are less than 6mm long and are not used during feeding. They have been no reported attacks by whale sharks on people.

The whale sharks give birth to live young, but it’s extremely rare to see. In fact, there’s only ever been one recorded sighting of a pregnant whale shark and very few sightings of whale shark pups.

In appearance, the whale shark is quite distinctive and beautiful. Their skin is patterned with lines and spots, creating a comfortable camouflage in the water. They seem to prefer living in relatively warm waters (at Ningaloo, it’s usually 27 degrees Celsius in the water, during the peak whale shark season).

The Migration of the Whale Sharks

Whale sharks are certainly migratory in nature, but their migration pathways and patterns are largely unknown. What is known, is that they arrive around Ningaloo Reef towards the end of March and stay until mid-September. Research suggests that from there, they head north and they do make seasonal appearances at Christmas Island and Ashmore Reef, which supports this.

Australia’s only swimming with whale shark tourism ventures operate out of Coral Bay and Exmouth in Western Australia. Operators use spotter planes to locate the whale sharks, which means you spend less time looking and more time enjoying.

Dive in Australia is pleased to provide an easy booking service for all swim with whale shark trips. Save money with no booking or credit card fees. We have experienced these trips and offer first-hand advice. We will help you choose the best operator and destination to best suit your experience and itinerary. Contact us today or FREE CALL 1800 323 703 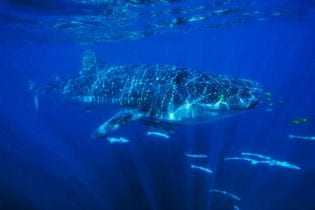 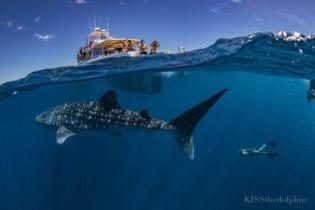 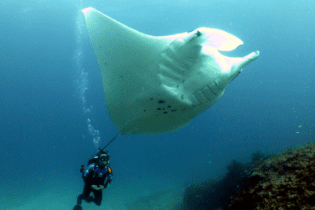