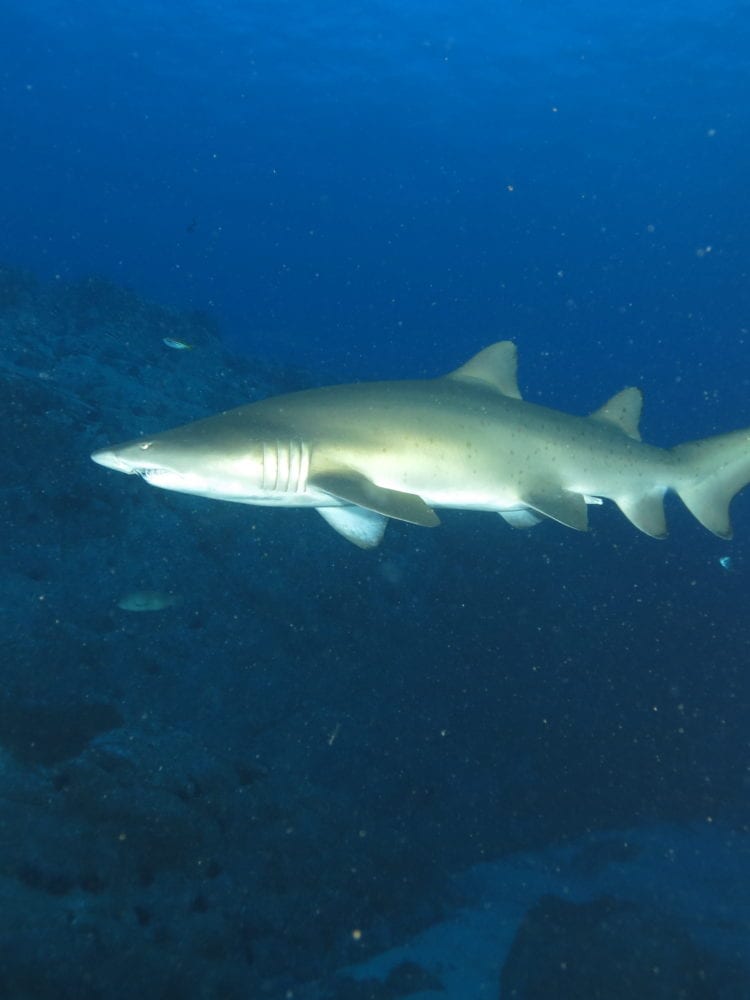 One of the most impressive sharks you will encounter diving in Australia is the Grey Nurse Shark. These large sharks look scary and easily identifiable because of their size, pointed snout, small eyes, and dagger-like teeth.  The Grey Nurse Shark is in fact very docile and pose no threat to divers and snorkellers.  I have dived several locations listed below in Australia where you can see these sharks frequently all year round. The docile nature makes for great filming and photos being able to get very close to the sharks. 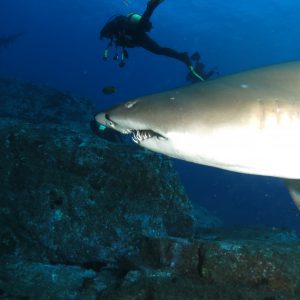 Grey nurse sharks have two large dorsal fins which are of similar size. The tail is distinctive, with the top lobe being larger than the bottom. Their upper body is bronze-coloured, while the underside is paler. Juveniles tend to have darker spots on the lower half of their body which fade as they get older.  Grey Nurse Sharks are on Australia’s East Coast endangered list and as such are still protected species today under the Commonwealth’s Environment Protection and Biodiversity Conservation Act (1999).

The grey nurse shark is found generally in inshore subtropical and temperate waters around continental land masses throughout the world.  Grey nurse sharks preferred habitat is generally deep sandy gutters or rocky caves as well as inshore rocky reefs and islands, usually at depths of between 15 and 40 metres.  Australia’s coastlines provide the perfect habitat for the Grey Nurse Sharks to live.  Not limited to but Australia’s South East Queensland and New South Wales coastlines provide the best habitat for the Grey Nurse Sharks to be witnessed by scuba divers year round.

The most popular locations where you can dive with the Grey Nurse Sharks is Wolf Rock off Rainbow Beach in Southern Queensland, Stradbroke Island in Brisbane and in Northern New South Wales Julian Rocks at Byron Bay.  In the mid North Coast of New South Wales is  Fish Rock Cave at South West Rocks and more local dive sites in and around Sydney. All these locations are well known for a large resident population of grey nurse sharks.

Male grey nurse sharks reach sexual maturity at 4 – 6 years of age, and females at 6 – 8 years.  Males grow to around 2 metres and females reach lengths of 2 – 3 metres. The breeding of grey nurse sharks is quite unusual. Mating occurs in autumn. There is a 9 – 12 month gestation period and the young are born in winter. Generally, only one to two pups are produced from each litter due to the more developed embryos eating the less developed and unfertilised eggs.

Grey nurse sharks tend to breed only once every two years, so with only one or two pups resulting from each breeding cycle, this results in an average of less than one pup per year from each female. This is the lowest reproductive rate of any shark and makes it more susceptible to external pressures. 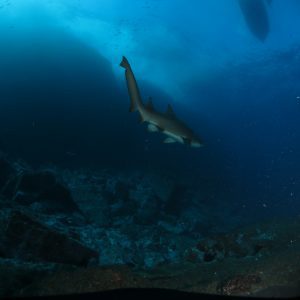 Did you know? • Male grey nurse sharks bite females during the courtship process. In the breeding season, it is common to see small scars on the females. • Grey nurse sharks are able to swallow air at the surface of the water in order to give them buoyancy control. • Despite the size and shape of their teeth, the teeth of the grey nurse shark are not very strong (Facts – Source WWF Natural Heritage Trust)

With their narrow eyes and dagger-like teeth, the Grey Nurse Shark might look frightening.

But these sharks are actually tame and friendly to snorkelers and divers. Their passive nature makes observation and photography easy—especially during the day when they swim slow. What’s more impressive than a photo with a real shark in the background?

These docile creatures usually get in groups—from a dozen to a few hundred. They generally prefer to thrive in rocky caves, sandy gutters, and inshore rocky islands within subtropical and temperate waters throughout the globe. Australia’s coastlines offer the perfect habitat for them, which means you can witness them around the continent year-round.

Here are popular dive locations in Australia where you can make friends with these “locals”:

A scenic 2-hour drive from Sydney is the small campground and collection of rocks that is Broughton Island. It is at the northeast of Port Stephens and accessible only by boat. If you’re travelling on a private vessel, you have to register with Marine Rescue Port Stephens.

There are several excellent dive sites, with North Rock probably the best known for shark encounters. Large rocks and walls form the natural aquarium of North Rock. You have various vantage points for watching grey nurse sharks and other marine creatures.

The dive site itself is comprised of four volcanic pinnacles and sandy bottom gutters. Dive depth varies from 35m to 11m.

This means that the large majority of Grey Nurse encountered at Wolf Rock are pregnant to varying degrees and each female individual has the capacity to stay on the site for the length of the pregnancy period (between 9 and 12 months) before heading south to pup. Male sharks are sighted from October to early December as they make their way from southern waters to breed.

You might be surprised to know that the largest aggregations of grey nurse sharks in New South Wales are just 3.5 hours away from Sydney!

Seal Rocks offers four dive sites with a varying depth of 30 to 120 feet. You should have recent experience in deep diving because the waters are more challenging.

The best time for grey nurse shark-watching is around June. Dive shops often recommend Forster, but Bait Grounds is another accessible site.

“Make sure you have the correct driving license before visiting. Also, listen to your instincts. If you think the dive is more challenging than expected, discuss it with your colleague first.”, advises Alister Clare, a leisure loans consultant at Credit Capital. 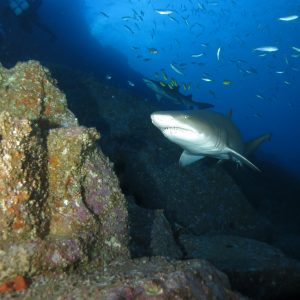 Fish Rock offers the only true ocean cave dive in Australia. The cave runs 125 metres, with deep and shallow entrances 12 metres and 24 metres below the surface, respectively.

You’ll see grey nurse sharks here all year round. They take it easy in the shallow waters at the cave entrance during summer, which is an excellent opportunity for new divers!

The South Solitaries is a collection of uninhabited small islands and rocks in the northeast of Coffs Harbor. The islands are 6 hours from Sydney and 40 minutes off the shore. Aside from being the set for an Australian romance film, it is also a favourite diving site for those who want to see grey nurse sharks.

The Grey Nurse Gutter has a bottom of around 60 feet and decent visibility.

Wherever you decide to dive, always remember to do it responsibly. Maintain a safe distance to prevent spooking the marine creatures and never block their movements. For more information about dive courses and tours, contact Dive in Australia.